The Garden Spot has special programming scheduled for the three Saturdays mornings before Christmas (Dec 7, 14, 21).

Alice will be reading and discussing several heartwarming topics and soliciting listener participation with their own  stories and remembrances.  These conversations will be started with a reading of articles written by Mavis Longfellow (mother of Alice Longfellow) that were published this past spring in the Kennebec Journal in Maine.

The six articles Mavis has written (and published by the KJ in 2019) are all reflections of her past, and focus on important things in life, such as family, values, and happiness. Alice will be reading 3 or more over the next three weeks, and yes, some of it will be reflect about gardening.  Below is her first article in case you want to share it or read it again. 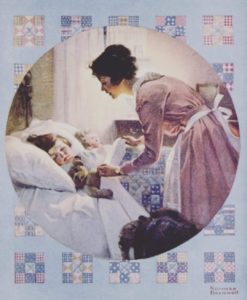 I looked at my hands this morning, because they ache, they are numb, and they have lost most of their strength and dexterity.  They look to be every bit as old as they are.   Then I thought of how well they have served me until recently, and of what they have accomplished, or have been a significant part.

From the time we draw our first breath, our hands are in training for a lifetime of use.   Mine never did learn to draw well or write beautifully, but not for want of effort.  In childhood my poor hands nearly froze sometimes in Maine’s snow and frigid temperatures.  Oh, how they ached!  But we kids would soon be back playing in the snow, with dry mittens and short memories for pain.  For a while, my young hands showed scratches, since I enjoyed playing with my cat.  One of the scratches got infected.   The doctor said we could call it “Cat-scratch fever.”

I struggled for years on the piano, and never did accomplish much.   I didn’t have real lessons, anyway.   The Hawaiian guitar, grandparent of today’s steel guitar, was easier, and it was enjoyable to play duets with my brother.  Every week we took the city bus from our South Portland home, where we lived for four years during the war, into Portland and handed over $1.00 each for our joint lesson.   After a couple of years we bought two electric guitars from Sears Roebuck, for $139.50 each.  When our Gram was in her last illness she asked us to play “Whispering Hope” for her.

My youthful hands earned a little money, as I scratched around in Mrs. Dyer’s garden, pulling weeds and planting flowers that her hands could no longer manage.  They earned me a few cents an hour that summer that I was 12 or 13.  Another summer nimble fingers picked strawberries on one of the farms in Cape Elizabeth, because all the young men had gone to war, so the women and old men hired kids, whom they hauled to their farm in an open-bodied truck.  3 cents a quart, for boxes heaped up, was the going wage for us.   We assumed the owners scooped the extra berries off the tops, to make more “quarts” to sell.

In our 1949 wedding, my husband placed a gold band on my finger, which I was privileged to wear for more than 65 years, until we were parted by his death.   My husband placed it there in 1949, and he was the one who replaced it the couple of times I had to remove it from my finger.

I had an old treadle sewing machine when I was first married.  I made a few clothes for myself and for my young children on that antique one.   Later, we bought an electric machine which I still enjoy.  Among other items, I made a dress for a daughter for college Chorale, helped make two bridesmaids’ dresses, stitched up insulated curtains for my home, and then began my quilts.  I made six quilts the tedious hand-quilted way for my six children, and then began making some for my grandchildren.  I have fourteen grandchildren and six great-grandchildren.  That’s too much work for these old hands in my remaining years.  I’ll make as many as I can, though.

How many yeast rolls have I kneaded, shaped and baked?   How many vegetables cut up for stew?  How many dishes washed, filled, and washed again?  How many cakes beaten 200 strokes, carrots scraped, potatoes peeled, turkeys stuffed and roasted, and hot apple pies set to cool on the shelf?  I usually had homemade snacks ready each day when the kids got off the bus.

How many diapers were folded, changed, washed, hung out to dry, and folded again?  How many were fitted to tiny, warm, squirming bodies?   Those were the days of cloth diapers, diaper pails, and big safety pins.  A mother’s hand would automatically slip between the baby’s body and the sharp pin, in case the pin slipped, resulting in a painful stab.  Every mother wishes she could save her child from pain, and would even take that pain upon herself.  Usually that is not an option, but moms do what they can.

How many hours did my arms hold, rock, and soothe my babies?   There is no bond that can compare with the one that exists between mother and child.   I still remember the peace and love of those times when the crying had stopped, and the innocence and beauty of my sleeping child flooded my heart.

For 27 years at the old greenhouse my hands tucked little plants into seedling boxes each spring, and hurriedly tamped them in. The boxes were heavy– the soil, too.  During the winter we had taken hammers in hand, and nailed up the seedling boxes from wooden shook, working as a family.  Later, when the customers came, my “cash register” was a wallet, receipt book, and pencil, to add up sales.

When we built the new greenhouses, I helped on weekends and at the end of often difficult weekdays I had spent teaching third grade.  After I got home from school and the kids arrived on the bus, we all drove over and joined the tired family crew.  Only two children still lived at home, but the older ones also helped when they could.  The present co-owner of the business, son Scott, was fresh out of college, and was there working from the beginning.  (He still is there, along with his wife as co-owner, son as general manager, another son occasionally, and daughter when possible.  His sister is display manager.)  One thing I did was to help carry the A-frames and stand them in place, in the cold winter air.  That winter of 1977 was a cold one.   I sometimes took supper to the crew, and we all worked late.  Finally back home, the kids did their homework while I corrected my pupils’ papers and prepared for classes the next day, washed the dishes, and fell into bed.

We retired after ten years and then took ten years off, but after that I got my hands back into it at the office for another few years, working sometimes until late at night.  We had several cash registers by then, as the business grew, and one of my jobs was to reconcile them.  These hands were reliable and seldom made mistakes.  They finally learned in the office about clicking with a mouse on the computer.

I hope, and I sincerely believe, that my hands have given pleasure, relief, enjoyment, comfort, sympathy, and happiness at times.   I caressed my babies and my husband to express love, and also my parents in their last illnesses, and tried to lighten their load, because I loved them.  My hands helped babies learn to walk, and delivered their first solid foods.   They detected fevers, soothed lame shoulders, rubbed away cramps, scratched itchy backs, and smoothed brows of sick or weary children until sleep came.   I pray that my hands do not fail me any further now that they are old.  A mother’s hands should never stop serving, but go on, and on, and on.   I say, “Once a mother, always a mother”—then hopefully a grandmother, even a great-grand mother.

Everything I have accomplished in my long life pales in comparison to my highest calling.  Above all, I am a mother.   A mother needs her hands!